After Marathon du Mont Blanc I felt I’m on the right track again. Body doesn’t hurt anymore, and I feel happiness out on the trails. Mum met me in Chamonix after dad left, and we had some good days together. We drove (well I did..) to Barruera in the Pyrenees where next race for me was held. A nice little town surrounded by grassy hills and stony peaks and ridges. Beautiful area!

My foot didn’t hurt, it was just telling me it was there, so I wouldn’t forget about it.. My knees were a bit sore, probably from Chamonix. But otherwise I felt good, and got so much energy from mum, and all skyrunning friends we met in Spain, also ready to run as fast as they could.

I didn’t really check the course anything. Me and Jennifer Asp thought we ran a part of it, which was great! But it was the 65 k course. But I’m glad I saw some more of the mountains here. Mum hiked and I ran some too, and later it actually turned out to be the last part of the course since they change to a B-course of predicted thunder on the highest point. So we got another ending of the race. Long downhill, instead of 3 k flat along the river. Which I was really happy for. I haven’t really found the speed and teqnique for fast flat running yet. Something I might have to work on.

Early in the morning had had a jog to see how my body felt. I started really slow and did some stretching and movement and jogged a bit more, before I did the real warmup for the race. I think my strategy was good for my foot and knee to be really prepared. In addition, all the nervous feelings before a race just fell of as I started to run, so that was good! I have got more perspective of life after my injuries, and still having Lina injured at home. So just being able to walk and move my body and that my muscles and bones do what I ask them to do, I’m really thankful for. I happy when I feel my body is working, when I have to struggle, when it’s tough and it is burning in lungs and legs. Then I feel alive. I guess you training people can understand the feeling and understand what I mean.

The forecast showed rain and thunder, but we woke up to a clear sky, so the rain might come later. But the temperature was lower than before, just a great running weather! The start was OK and I tried to keep on with some runners, I saw Holly Page and Megan Kimmel in front of me and later on Ragna Debats. I passed Megan, but saw she had some pain, and later on she actually stopped. I tried to get some flow in my running and push where I could and run and “tip toe” as far as I manage when there was anywhere steep. In the first downhill I stubbled and felt pain in my achilles tendon. I had to slow down even though I wanted to fly down. I was really afraid, it felt really tense and just the thought of that it could snap made me shiver. But I manage to find some speed anyway thanks to some guys just behind me that I didn’t want to have in front of me. I think that is irritating. Someone just behind or in front just doesn’t work for me.

The first half of the race was a great mix of other races I’ve done, It reminded me of both Olympus Marathon in Greece, Trans Rockies in USA and Yading skyrace in China. But still another experience. I found a good rhythm and couldn’t see any threat behind me as I glanced back once. So I told myself that no woman were aloud to pass me, even though I had 20k to go. I felt that I could hold on to this and don’t be tired. I had a 6th place, I didn’t know how far it was to next woman in front, but tried of course to run fast to catch up. But no one to be seen. It never started to rain, it was just a dense pressure and thunder in the distance, otherwise pretty nice running weather. I didn’t get so thirsty, so didn’t have to stay on the next aid stations, I felt good.

My legs started to answer now, and after a long steep grass climb I recognize where we were. I ran here the day before yesterday! Though the other way around, but it felt great to know all the way to the finish now! I passed some guys and speed up a bit more. On the downhill I felt I was really fast, first on a 4wheel track which was nice to just let the legs roll, and then the technical decent started, it was the VK but downhill. I had so much fun! Now the rain started, but the stones weren’t slippery yet, so I felt I could still have some good speed. I felt really good sprinting into the finish, I was so happy, the rest of the day I spent with mum and the other athletes. What a great experience.

Mum left the day after the race.. so I was by myself now. I decided to stay in the area around Barruera, and discover the National Park there. I had a great time!

Then on Thursday I went over to the French side for a little local race called Les Trois Pics. I checked the highest point of the course, jogging and having an epic evening. Soft trails and grassy meadows, yet really steep and a few parts technical, and very nice views of mountains on the other side. The village lay down on the flat country side, so I was surprised to see the mountain peaks up on the top.

The race was 22,5 kilometers and 1400 meters of elevation had a rest day before the race. So I thought at least the distance would be the same as Skyrace Comapedrosa in Andorra, just a little bit less elevation, and not the same altitude. I was glad that the terrain seemed to be soft too, because then I wouldn’t be sore.

The start was neither fast or slow, but I found my own pace, and kept on going. Two guys had kind of the same speed, and we shifted positions during the climb. I had brought 3 gels with me (Never have had 3 gels on such a short race) But I had them all until I reached the ridge. My legs were happier than ever, and I flew down the trails. It was a bit foggy so we couldn’t see much on the ridge, so I was satisfied of my “checking the course run” the previous days, when I had had views all over the valley. The last 6 k were really fast runnable, and I haven’t feel that strong since I can’t remember, I trusted my knees, my foot and my body for once! And finished some minutes before the guys I ran with on the climb, and a 15 minutes or so before the second female. So the field wasn’t so competitive, but I had the feeling that I could have done pretty well if there had been some more elite female runners on the startline too.

It didn’t bother me much that the price were 3 kinds of beer, 2 meet products and a big jumper, My price was the good feeling I had during the race. ( I threw away the meet, saved the beer for my parents, and use the jumper in the early mornings outside my motorhome eating my breakfast!) Now I felt prepared for Andorra!

With that said, my knees started to hurt, and I have struggled the whole week with pain in them. But biking, stretching and resting will do good, now 2 days of rest before RACE! 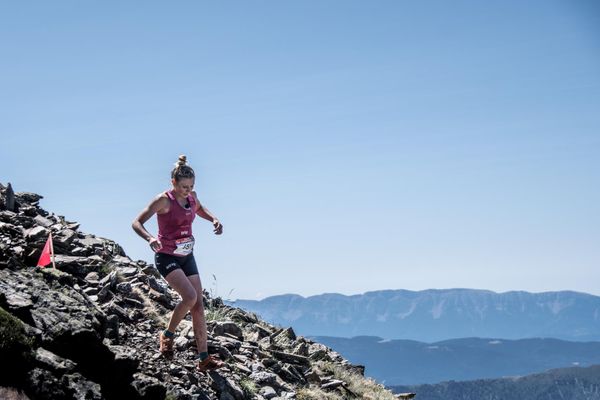 Race Report from SkyRace Comapedrosa 21 k and 2300 m of elevation! Started strong but then something happened on the last decent.... 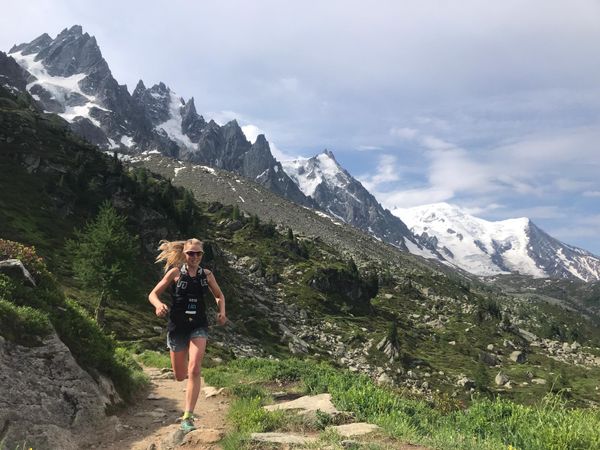