I arrived in Zermatt in the middle of the day. The travel had taken longer than I had expected, so I was eager to come out on the trails for a run. It felt good and the weather was nice. I used poles not to activate the whole body and save it in the downhills. Later on I met some friends and we had dinner.

I shared hotel room with Johanna Åström. All athletes were pretty much spread out all over town, but we were on a cozy small hotel. In the morning when I warmed up before the start I couldn’t feel the same light body and energy I’ve had the previous day. I tried to neglect bad thoughts and focus on the excitement of the extreme course that was ahead of me. Martin Anhmanattan was told to make an extreme skyrunning course for the Ultraks weekend, so he had put in much effort to make it just that, and with both fear and joy we all stand on the start line not knowing what to experience.

The first 2 k through town and up the trail I pushed and tip toed and manage to be third. But suddenly just after Hillary Gerardi passed me, my legs shut down. It was irritating cause I wasn’t tired, but it was if the legs didn’t have connection with the rest of the body. I didn’t get forward! People were passing and I tried to run where I could and take big steps were it wasn’t too steep. But the speed wasn’t anywhere to be seen. Athletes that I ’m usually faster than also passed me, and I was happy for them to have a good day. Maybe a bit envious too.. I couldn’t do anything but try to fuel myself with gels and drink and climb further up. I was in a good mood though. There were only the spaghetti legs that were wrong. The rest of me stayed in a good spirit. The trail had disappear and it was scrambling and climbing. I usually do that pretty well, but as my legs weren’t in the game, neither was my technical skills.

I liked the off trail section with a little scrambling before the first descent though. The descent I had heard of others who had tried the course before. Crazy they said. And yes it was STEEP. Good that the organizers had put up a rope. Loose stones were everywhere and I got a big one smashing my lower back just in the beginning from a guy behind me. Ouch.. That scared me and I took it really easy from there. A group of runners flew passed me. I didn’t trust my legs since they couldn’t push uphill, would they then be strong enough to carry me down in full speed?

I think I got into a bubble of slow motion. It didn’t feel as I was racing for a while, but still I put all effort that I had into the race. A Strange combination. The second climb up to a hut never ended and I actually drank more than I thought I would during the course. I filled a 500ml up twice before the first aid station and finally on the aid station I filled it up with coke and energy drink. I stayed for some minutes to fuel up, doing everything I could to wake up the lower part of my body. And off I went.

Everything else was so good, no pain, good breath, great weather, but no legs. I guess it can be the altitude that chocked them. I don’t know anything else. I haven’t quite experienced the feeling before. The course were really technical and not very runnable on many parts. So that might also be a fact why my legs didn’t woke up. With some running they usually understand what they have to deal with.

On the glacier I felt something was changing and a glimpse of adrenaline and strong muscles appeared! The mini spikes on my feet I went down the glacier (which wasn’t that exciting) just a snow and ice field. There are many more spectacular glaciers than this one. However, one more little climb and there was only a long downhill left! First a tricky part with flat slippery stones with many small ones on top of them and then some shiffer kind of stones. But after that the really fun part begun! Runnable! Now I could use my energy that had been deep down there! I flew down and it was soo fun! I thought by then that I maybe shouldn’t do so techical races. I like when it is techical, but not too steep, and not steep on one side so you have to traverse. On my good time in the downhill it was unfortunately too late to catch any runner ahead, but I’m glad I had a blast the last part of the race and did recognize my legs again. A pity they didn’t existed the first half..

Johanna didn’t disappoint, she won. Wow, so glad for her!

I was signed up for the VK in the evening, so was Hillary, (who finished 2d). I ate much after the long race not to be lack of energy again. I thought maybe my legs need a really fast and short session to be normal. I hadn’t slept much during the night and was very sleepy and the coffee I had didn’t change it.

But I was curious how my legs would handle an uphill again. I knew what was waiting since I did the Vertical 2 years ago. It is a course of only about 2 kilometer and 670 high meters or something. I started 30 seconds before Victoria Kreuser (queen of verticals) and we started last of the field. She had fresh legs so I wasn’t surprised when she passed me about 3/4th into the race. I regret I didn’t use poles. Why didn’t I?! On this VK it would have helped me to do so much better. I actually regret I didn’t use them on the extreme course either.

I could however push without thinking. I like verticals. You don’t spare anything, it is just go go go for a pretty short time. Max from the start to the end. I crawled and climbed with my hands and collapsed into the finish. Exhausted but happy. So worth it. Best view ever. No wind, nice temperature, happy people and above all, GOOD legs!

Hillary bet me by 50 seconds and I was 4th. Though, top 3 all had had poles, so I was satisfied I did good without any support.

My plan together with Johanna was to start the 19k course the next morning. And I prepared for a nice race. My body felt really good in the evening. But as I woke up my left knee was very stiff and hurt… I have had the same kind of pain before and know running fast isn’t a good option. I decided not to start and went out hiking instead that was good.

I followed the 19k course the other way around, coming into the 47k course and cheered on the runners coming downhill from Gornergrat. I met the Japanese runner and photographer Nagi Murofushi who also hiked. And we went up to Gornergrat together, so many people there, running the race, but also tourists. Up there Nagi ran down and I continued my hike to Stockhorn. Magical views wherever I turned my head, and here I was alone.

I got a message from Lina. She had run Bydalen Fjällmarathon 20 kilometer at home! Wow! I couldn’t believe she tried to ran that far! She won and had had a very good feeling! IT WAS SO FUN TO RUN! She said. I’m so so happy to finally hear that, and can’t wait to come home and run together! (Though easy steps forward to not get that shitty thing back!)

I had a great evening thanks to the message, filled with joy, it ended the trip in Zermatt perfectly.
PS: See the highlight movie here!
Next up: EUROPEAN CHAMPIONSHIP IN SKYRUNNING IN ITALY!
So long
Sanna 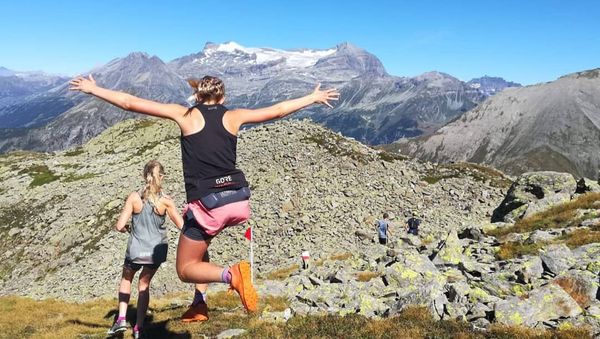 Race report of the European Championship in VK and SKYRUNNING. Great time, many new friends, but also something else... 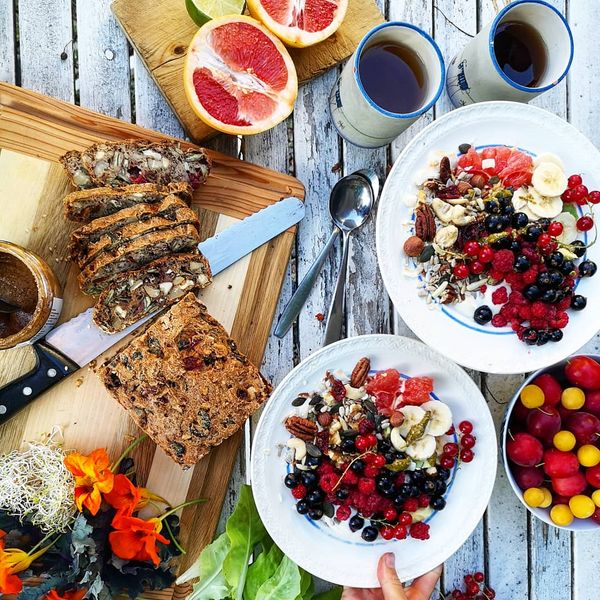 Plum and nut bread. Best taste of autumn. Crunchy, sweet and savory in one bite!