Finally a race! An Adventure Race for training and fun. JAHARU20.

During the race I was eager to come home and write a race report and tell all fun and not so fun parts we had been trough. There are specific moments, places and feeling I wanted to tell you about. And now afterwards when I sit ready by the computer, my mind is just empty. Totally blank.

At one point I wanted to tell the whole race from the very beginning to the end.  But then again, you should have been there yourself to experience it. But here is a long story anyone, but in my opinion short. :P and PS.. Sorry for the blurry photos. Next time I might have a better mobil camera..

Our friend and actually first team mate on an Adventure Race in China some years ago, Crister Löfgren created an Adventure Race here in Jämtland with a few friends. Lina and I were fast to enter and asked our recent team member Lars Bukkehave from Denmark if he wanted to join. He was in, and also brought a third twin, the Danish guy Mads Troelsgård, (he left his twin in Denmark). So the four of us were the team “INGA PROBLEM” (No Problem).

We had a few days in Åre and then Östersund to come to know each other and train and rest and cook, and of course pack everything that was needed for the race. There is usually pretty much gear. Though we all were quite happy there weren’t so much needed this time. The race wasn’t really a serious race, it was a fun event together with a bunch of friends and Adventurous people that want to play in the nature, eat lots and suffer for some hours together.

The weather was super-hot and sunny. It felt like we were somewhere in the tropics.

We started at 17 pm Friday 12 of June in Fugelsta. Ran smoothly about 4-5k and reached the bikes and then went out on some technical single tracks there. A bit “Ringrostig” in the saddle after such a snowy spring where we mostly have gone skiing. But after a while both of us were friends with our bikes.

After some more biking, and then running orienteering the sun was about to set. We biked on gravel on St. Olavsleden towards Gällö and on a road we discovered this winter when we ran a longer training session with spike shoes and winter clothing. By that time we had no idea we were about to bike here some months later in 23+ degrees Celsius!

The sunset was epic, (aren’t most sunsets epic, even though you have seen many?) and the light were strong and reflective on a calm lake we passed. No wind except the wind from the speed of our pedaling. We biked closer to where I’ve heard there are bears around. I couldn’t really feel if it was curiosity or fear, did I want to meet one, or not? What happens if? What do we do face to face?

I didn’t have to think about it because we didn’t see nor meet any... What we met though was a long uphill gravel road. I was glad on top even though the mosquitos wanted to party on us when we stopped.

The whole team said afterwards we liked the following part. The light was bright even though it was midnight. We were bushwhacking down and up and down again, the moss and forests were wild and cozy. We came out on an old trail and a little shelter where the cp was. We covered some more k’s during early hours, over cutovers and ski slopes. After taking all cps we were at the bottom of the gravel road again… But you know what we like, don’t you? Tiptoeing up and on top there were plenty more bikes. That’s the fun part of racing, knowing there are other teams out there doing the same thing!

With four big smiles we continued biking and a new day begun, the heat from the sun hit us. I’m sensitive to sun and heat since I was in an accident because of dehydration a few years ago. My body protests as soon as it is too hot. But this time I strictly drank more than I felt I needed, both water and Maurten energy drink. It was just at one point I could feel my head ached and I was overheated. I began to think we’re pretty much like plants. Now in Corona times we have plant a lot in our garden, and it is fascinating to see all tiny seeds grow and start to live! Though if you forgot to water, and it is too hot, the plants will dry out, and almost die. But as soon as they get some water and fertilizer they’ll rise again! And that’s what I felt me myself also did. At a low point when we filled water after a while without, and I ate a bar. I could feel my brain cleared up and I could focus and get energy back in a minute! (Though I wasn’t close to die, but you know what I mean).

After some carrying with the bikes on a somewhat forgotten trail, we came out on the start of Forsaleden. It is a well-known place for bathing and swimming in summer. We have been there many times as kids. Now it was time for 30k run! Yihaa!

But the legs felt very heavy, and instead of us being fast, Lars was very energetic, and kind of sprinted in front. Though the first half of the run was the best. Then asphalt roads came, and those Fcking cutovers!! Took ages. Though it weren’t there I fell. Instead I smashed my knee and hands up and was covered in blood, on the gravel road! Typical to not focus where there seem to be no need for it…

Next mission we got was to get over a little lake. Only about 100 meters. There was two tiny gummi boat, one inflated and one still in the package. We could either go 3 in the boat, and come back and get the 4th person with bags. Or wade over, but we didn’t know how deep it was. Lina didn’t want to swim. We chose the boat. I put myself in a comfy seat in the boat, but I didn’t have time to do anything more before it exploded! A big whole was cut by a big branch under the surface. I felt so clumsy and stupid. Why didn’t I go further out!? We were fast and took the other boat out and starting to pump it up. In Adventure Races is no idea to blame anyone..

Lars row with Lina and me tight together in front with our feet up. Looked and felt funny. Mads started walking over and the water actually only came to his chest. It was mandatory to leave at least one boat on the shore we came from. And it was one team in front of us who left one on the other side. Mads took them both over. I think he liked the water.

Now everyone thought it would be a nice trail, as shown on the map. But you know what? There was a big hell of a cutover... The sun was shining though, so we stayed happy. It was a long and boring way back since it was pretty much the same route as we had been on. Soon we were at the kayak transition! We were happy to sit down for once. Lina and I usually don’t like the water stages, but this was our favorite at this point! Clear, turquoise greenish water (Lockesjön) and blue sky. We had the best time. We were in the same kayak, and Lars and Mads in a heavier one, that made the teams speed similar. (I don’t have to say which boat belongs to us and which one Lars brought). The stage went smooth except that the rudder on the guys boat fell off. But we fixed it with a sling Lars had on his backpack. It is those things that happens only on races, and we solve them.

TA was on one of the organizers summer cottage boat house on a new built veranda by the shore. Here we would have a mandatory 2 hours rest later on. But first a 12k run. She told everyone there was a nice running loop in the forest they had just marked with spray. The spray was called “Bubblegum” and was pink. We searched for the start for quite a while. Couldn’t find anything where they had marked on the map. Finally, we just used compass and came into it on a winter snow scooter trail. Bogs. The markings weren’t many, and the bogs was wet and hard to run. We came to the conclusion later on that she made fun of us all. She wanted us to struggle. No one had enough energy to RUN this trail with backpacks after many hours out already. We went bushwhacking following and searching for the Bubblegum markings. And Lars’s frequently words all the time is still echoing in my hears: “ Bubblegum.. Bubblegum. Do you see bubblegum?”

The coffee I brought in a thermos, the salted potato crisps, and a freeze dried veggie risotto tasted very well on the veranda later on. And to lay next to Lina in the sleep mat was cozy. Soon we sat in the kayaks again on our way back. I think it is the first time on a kayak stage I wanted to continue kayaking! It was too short.

The other reason I wanted to stay in the boat was that the same person from Bubblegum had put up the next bike stage too. So we kind of knew what was coming… Carried bike through cutovers and bushes for a while. But finally came out on a road and could bike FAST again!

Lina and I were pretty amazed by our team mates, not for their behavior, (they were farting and burping here and there and everywhere) but because of their navigation skills. We trusted them the whole course and it was fun just to do the adventure and not focus on the maps. (Even though I miss that part a bit too). We need to do a small race just the two of us, and manage the orienteering ourselves. But don’t want to screw up for someone else. :P

The next coming hours was very fun, but our bodies started get tired. Andersön are well known to us. And next run was two controls there. We didn’t feel tempted at first. But then mum and dad waited at the TA to cheer on us! Kira really wanted to share rest of the race with us. We were filled with endorphins again and didn’t feel so much of the pain in our legs and knees. Lina and I who had been negative to the run on Andersön literally flew again on the trails! It was sunset again, and the island were filled with campers and BBQs, a very nice evening!

The last bike part was so nice with forest roads and single tracks. Let’s forget about the butt pain. We don’t need to mention that… We ended the race in full speed and downhill to a colorful sky and empty finish area. My new Polar X-Grit watch told us we had been out for 31 hours and 19 minutes. (We went directly home to sleep). And the next day we came back to eat pizza and chat with the other adventure racers.

Here’s what I brought to be able to get trough this: 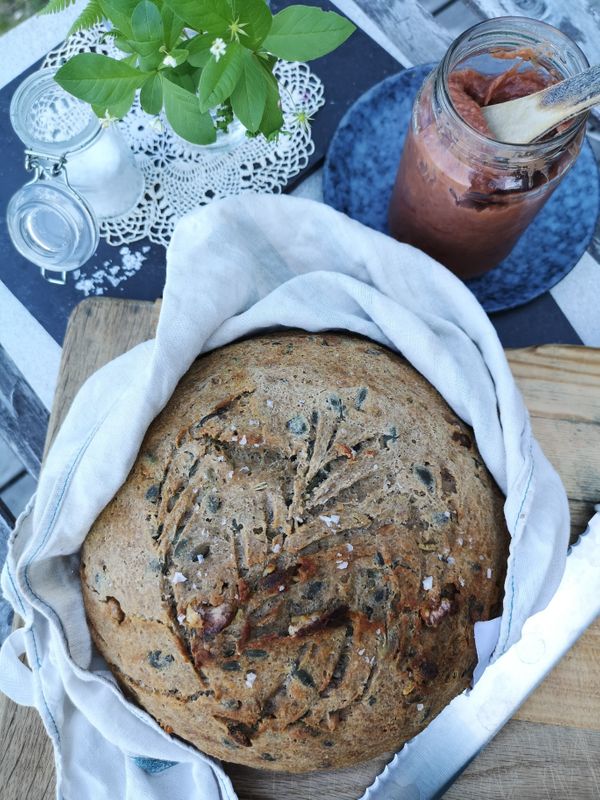 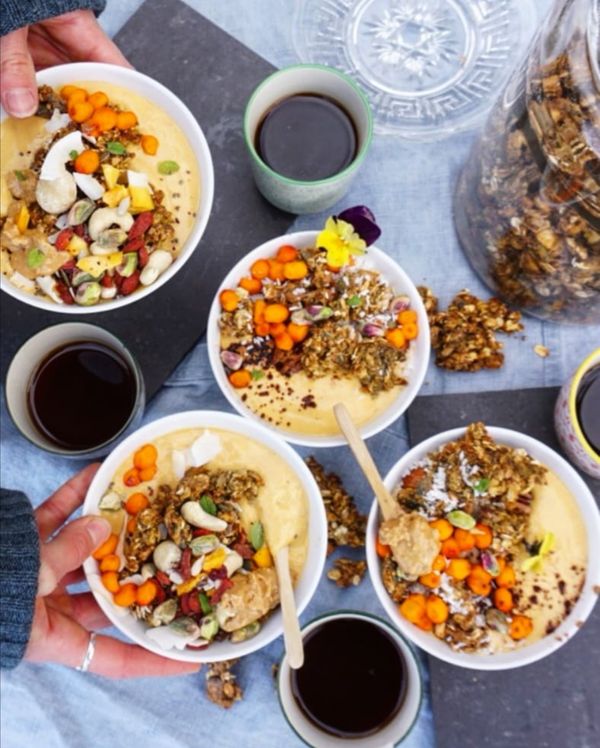 Pumpkin Smoothie with Pumpkin Granola! A very delicious Breakfast. Pumpkin is perfect to make different smoothies with, and the granola went out so good!