We have been in Switzerland for about two weeks, staying at Deborah and Werners house in Champex-Lac. They are two professional athletes just like us. Though mostly in Ski mountaineering, but also some running. They have taken us out on so many beautiful places around here, and we have grown as skimo athletes as well. It really takes time even though we have been doing skimo for a few years at home, we have learnt new things here directly. We have also competed in three skimo races.

First out was the Swiss Championship in Vertical. Very fun to compete amongst the best. But the course itself wasn’t very spectacular. Steep beginning and then very, very flat, almost like cross country skiing instead of skimo. With better equipment we might have done even better than we did, but happy to finish 4th and 5th just behind three very talented swiss athletes.

The other race was a little night vertical race. Though both Lina and I were very tired and out of energy since we had been out in the mountains constantly the other days, and went for 25 k skating session in the morning. But how ever we went there with Debbie and it was a familiar atmosphere and actually individual start, which is pretty unusual for skimo. 20 seconds between everyone. The start was narrow in the forest at first, very icy, and I fell once. I could hear Debbie behind me. She had decided to start after me so she could have a good hunt. Lina was the one to catch for me. I think it is easier to hunt than to be hunted. It is like you almost wait for the ones behind to come next to you.

This course was also very flat, only 3,4 k with 450 hm. So not really verticals as we are used to summertime. I started to run on the skis and felt more comfortable doing that. I felt it also went faster than doing some kind of cross-country skiing style. I passed some other guys and kept my rhythm. Couldn’t swallow though, then I would have been coughing and been out of breath, so breathed with my mouth widely open the whole race.

Last part was carrying the skis on the pack, booting about 200 meters up and down. I didn’t put the skis very good on the pack and in the downhill one of them almost fell off! Practice needed.. But oh this was fun, even though both our bodies were very tired we had a great moonlight evening. Deborah were 13 seconds faster than me and won, I came second, and Lina 4th, not far behind.

The other days after the night race we haven't been feeling very well. We have been so low. Legs aching, and no motivation for hard training. But we have been our skiing anyway because the weather has been extremely good. Not perfect when you need to rest..

The third, and last race for this time was a team race in Morgins. Just a 12 k skimo race, 2 boot packing though, but small downhills. Sounded good. Lina felt very dizzy in the morning, and I had head ache, but we were determined to start. Neither felt we could push very hard, but we took the lead anyway. We are strong up, and knew the other women team probably are faster downhill, so took the advantage of being mountain goats.

The transitions aren’t our strong sides yet either, but we manage to do OK. We had borrowed Deborah’s skins, and Werner had waxed our skis. It was nice to trust the equipment more than we normally do. Everything went smooth and the small downhills were surprisingly good with powder snow! We were a bit disappointed that the race was so short, once we had started, we wanted to go higher in the mountains, but in the same time, both of us hadn’t our best day, so it was probably good it was a short one too.
The last downhill was a long and prepared slope, and finished with a skating part. After the race we just took it easy, and that is how we continued today too. We need some rest now. Good to go to London for a GORE event! 😉 We are back in the mountains the 17th, probably with more energy again! As said before, MOUNTAINS GIVE, BUT THEY ALSO TAKE! 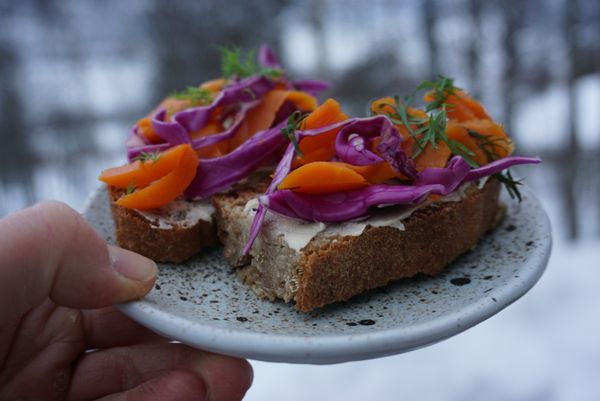 A very tasty bread that is the ultimate picnic bread! Top with fake salmon and pickled red cabbage. 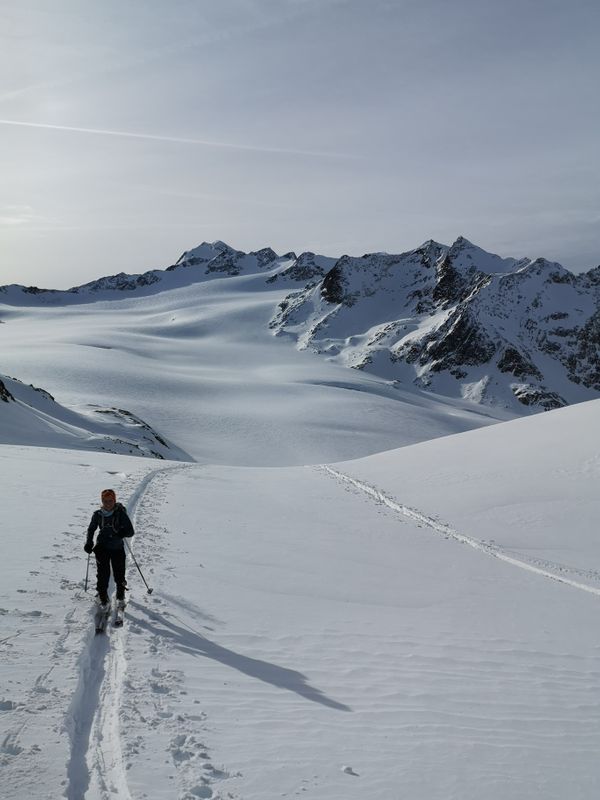 Training Camp in Pitztal, Mandarfen in Tirol in Austria. Much Skimo, cross country on high altitude. Good with Hotel Vier Jahreszeiten for reload, relax after training and eat vegan food.